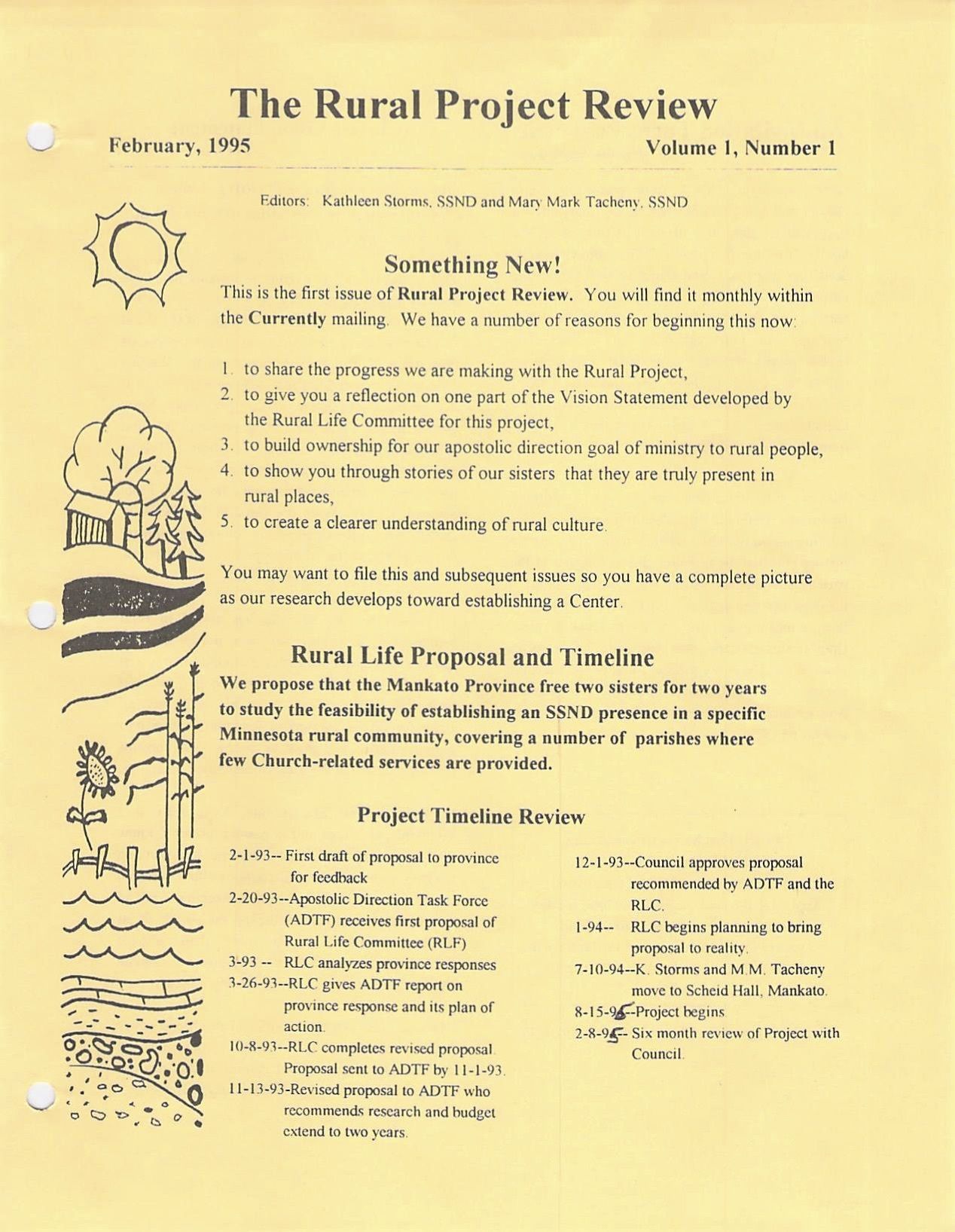 Thanks to CESRM co-founder Sister Mary Tacheny, LEC was given access to early issues of Earth Almanac (from our founding in 1996 through 2003) and even a look at the work that went into forming CESRM with 9 issues of The Rural Project Review from 1995.

All archived issues can be found in the Earth Almanac Archives section of our website (click here).  We encourage you to browse through them, they showcase how deep LEC's roots are.  Spelled out on the pages is the SSND commitment to sustainable living and Right Relations with Earth.

We will highlight just a few issues here.
The first being, obviously, the very first issue of The Rural Project Review from February 1995 (pictured above click here for full issue).  As Sister Mary explained, "At this point there was no decision as to whether there would be a Center or where it would be located."  The project began in 1993 at the behest of the SSND Rural Life Committee, and Sister Mary and Sister Kathleen Storms used the issues of The Rural Project Review to share the progress they were making on what was then called The Rural Project.

The very first issue of Earth Almanac in May of 1996 (click here for full issue) where The Center for Earth Spirituality and Rural Ministry has been formed, but as Sister Mary explained, the Sisters had yet to decide where the center would be located.  There is also a beautiful "Reflection for an Ecological Age Logo" written and illustrated by Sister Mary Anne Osborne.

In a 1998 newsletter (click here for full issue) we get to read about the garden and it's 17 plots, most of which grew food to feed the Sisters on the Hill, but they also mention a plot gardened by members of the Youth Garden Project (eight 12 year olds), and one tended by the Mankato Area Life Lines Program (a program for ESL families living in the area).  Here we see not only the beginnings of our Community Garden, but a direct connection to the partner plots LEC now tends to over 20 years later on that same soil.

LEC wants to thank Sister Mary for sharing these newsletters with us, giving us a deeper sense of where we came from.  We are so honored to be carrying on the legacy of both SSND and CESRM.