The idea to hold an Earth Conference grew out of a desire of the SSND Earth Committee (the group within SSND responsible for the push to start CESRM back in 1996) to educate both themselves and the broader community on issues concerning Earth, sustainability, and the spiritual elements connecting those issues.  "If we were to become advocates for a cause, we needed to be educated about those causes," said Sr. Mary Tacheny, one of CESRM's founding co-directors.
The SSND Earth Committee and CESRM joined forces with the Minnesota Earth Sabbath Team, which had been holding annual seminars on our relationship to the land with an emphasis on water for a number of years previous, and out of these groups the first Earth Conference Task Force was formed.
The Task Force meets once per month year-round planning the conference, and the SSND Earth Committee as a whole still plays a vital role in the conferences, helping with set up/take down, serving lunch and coffee, and running the registration table.
During the closing of the first conference, then CESRM co-director Lisa Coons announced, "We'll see you all next year at the *second* annual Earth Conference!"  She liked to joke, "and we've been hosting these conferences ever since!"

(A special thank you to Sr. Mary Tacheny and Dee Czech for sharing both their memories and documentation from the early days of our Earth Conference.)

Though each Earth Conference has its own theme and format, there are a few elements that remain as constants throughout the years...

Check-In and Fair Trade Coffee with Homemade Muffins
Each Earth Conference begins with a time for participants to check-in, mingle with other participants and enjoy fair-trade coffee with our famous homemade muffins.  Sister Gloria Degele (with help from Sisters Kay and Annette Fernholz in the past few years) makes all the conference muffins from scratch!  They are a delicious treat and once you have one you can't wait until next year so you can have them again!
"Come for the Conference, Stay for the Muffins" is our unofficial slogan. 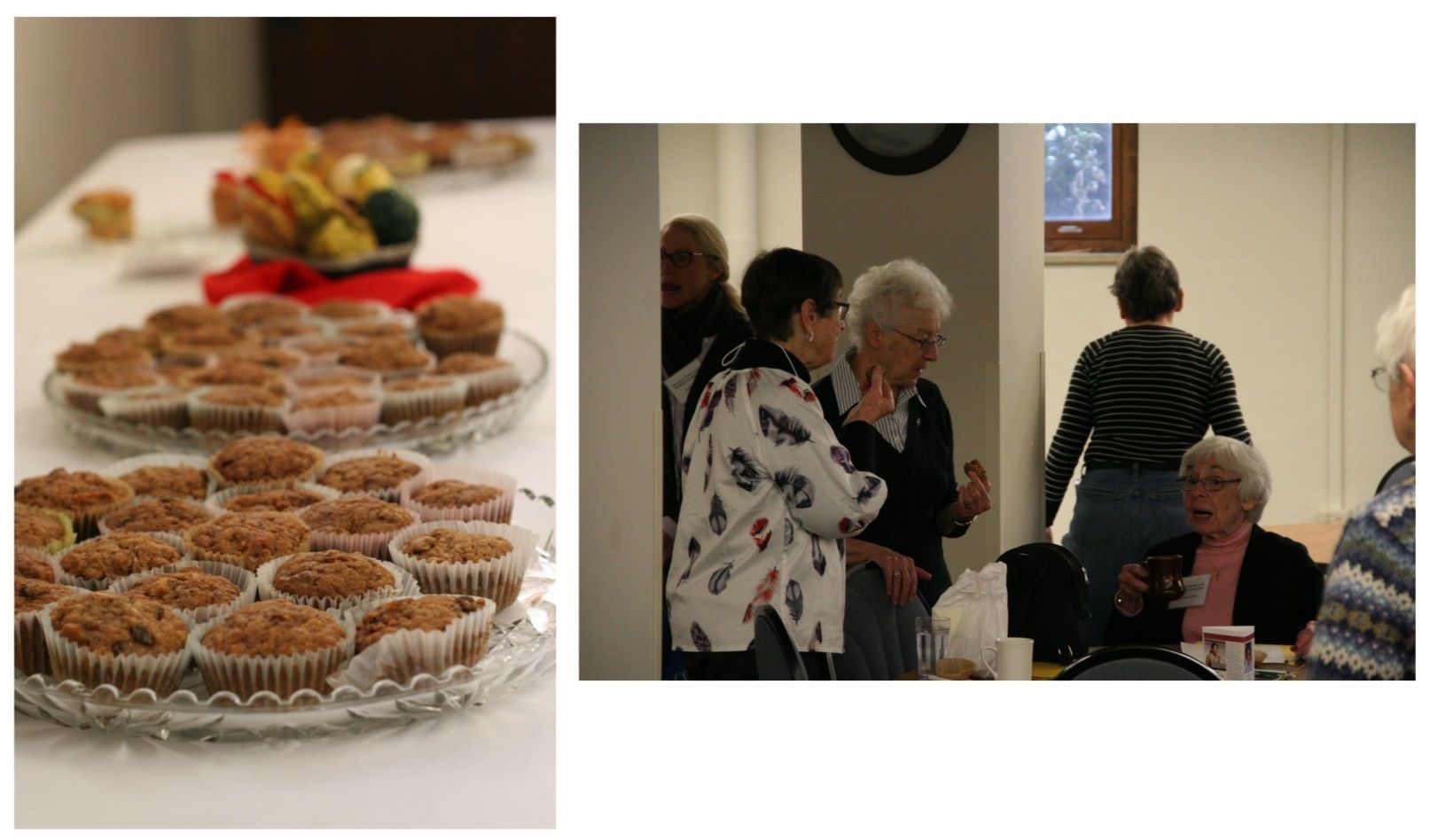 Opening and Closing Reflections
The spiritual element is what sets our Earth Conference apart, and our opening and closing reflections are the times we take a moment to pause and reflect on our purpose, to take a collective deep breath before we being the day's work and then again before we head out into the world again.

Lunchtime
Every year the brochure reads, "Lunch: A Simple, Local, and Sustainable Meal."  The menu rarely varries yet every year gets rave reviews from participants.  A vegetarian chili, made with with many vegetables grown right on The Hill and prepared with help from SSND Sisters, cole slaw, a whole wheat roll, and apple crisp (with apples either from the SSND orchard or donated from the orchard at the Henderson New Country School) for dessert. 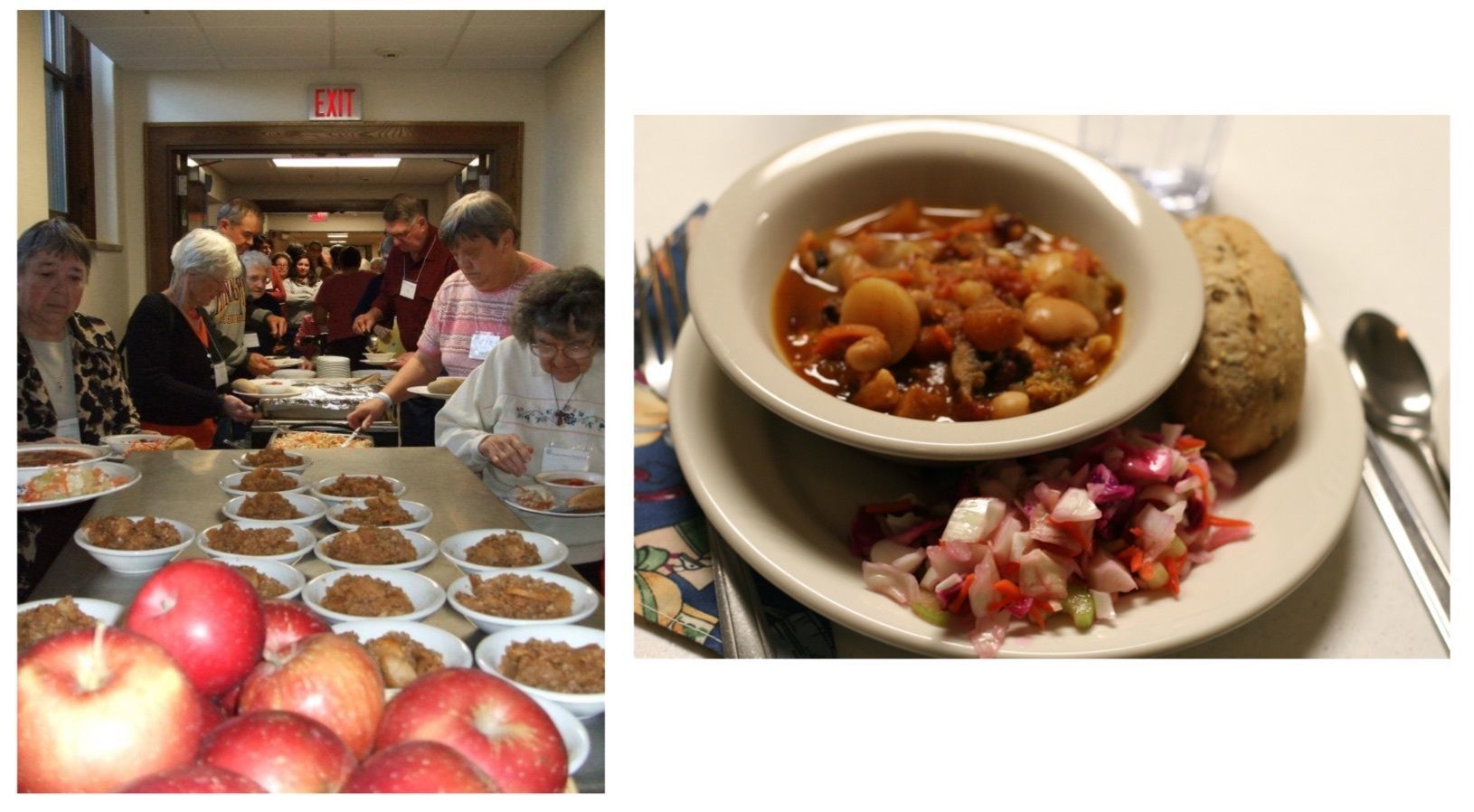 Lunch is held in the Rounding Dining Room, just across the hall from the Conference Center, and it affords participants more time to talk and interact with each other in a less formal setting.

Table Talk/Discussion Time
Though conference formats have varied over the years, the one item that returns year after year is time for table/small discussions, allowing participants to share ideas with their neighbors and the group at large, broadening perspectives and voices that are heard. 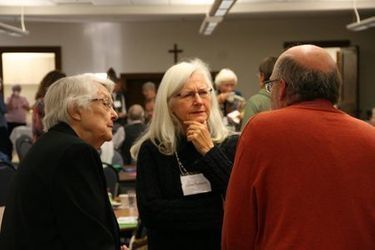 Resource Tables
Sometimes with literature related to the conference topic, sometimes with information from the different groups our speakers work with, there have been a variety of different resource tables at our conferences over the years.

Door Prizes
Every Earth Conference ends with the drawing of names and the distributing of door prizes!  The prizes vary from year to year, but always include crafts and jams donated by SSND Sisters, fair trade chocolate, and a book or two related to the conference theme.  "You must be present to win!"  So no leaving early if you want to score one of these fabulous gifts!